Van de Weghe Fine Art is pleased to announce an exhibition of Alexander Calder’s sculpture. Calder (1898-1976), alongside Brancusi, Giacommeti, and Gonzalez, is a master sculptor of the twentieth century. With the invention of the mobile, and the consequent introductions of elements of play and chance – or the “apparent accident” as Calder deemed it – the artist took the poetic activation of space far beyond the object, creating sculpture in a fourth dimension.

No other sculptor made such strides formulating a modern conception of space – what Mallarmé called the critical issue of Modernism itself – by taking three-dimensional form to a new level. Calder’s contributions to Modernist aesthetics are among the most significant of the pre-war period, paving the way for the expanded field of sculpture today.

Focusing on works from the ‘40s and ‘50s, the exhibition will include a variety of Calder’s signature forms: tabletop pieces, hanging mobiles, stabiles, and standing mobiles. These works have rarely been publicly exhibited, and some are being shown here for the first time. The sculptures range from the intimate – the elegant, multi-colored Boomerang of 1941 – to the monumental – Untitled II (1954), a massive standing mobile constructed of steel and aluminum. It is a diverse and fascinating group of works, representing many facets of Calder’s rich and important legacy.

A fully illustrated catalogue, including an interview with Alexander S.C. Rower, director of the Calder Foundation in New York, accompanies the exhibition. 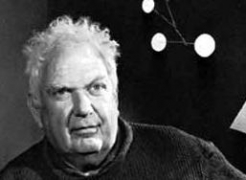 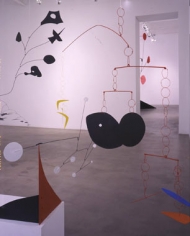