Van de Weghe Fine Art is pleased to announce its inaugural exhibition, “Andy Warhol: Works on Paper from the Early ‘60s.” Culled from a number of private collections and with the assistance of the Andy Warhol Foundation for the Visual Arts, the 15 works, dating from 1960-1964, will be presented from November 10 – December 16, 2000. The exhibition will focus on works from the early 1960’s related to Warhol’s most iconic paintings of the time, and include both rare, hand-drawn works and unique silkscreen treatments of Warhol’s subject matter. Indeed, it is during this period that Warhol’s fascination with the pop image and the consumer object as ready-made icon comes to the fore. Warhol’s focus on what makes Pop art Pop begins in the early ‘60s. Many of Warhol’s favorite subjects—Campbell’s Soup Cans, Dollar Bills, consumer goods, advertising logos, and celebrity portraits—are included in the exhibition. Several of these works would develop into some of his most celebrated paintings. An illustrated catalogue, with an essay by Gerard Malanga, who worked with Warhol during the ‘60s, will be published to accompany the exhibition. 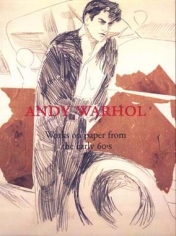 Andy Warhol
Works on Paper from the early 60s